The Meeting with World Bank experts
Meeting with World Bank experts with the head of Europe and Central Asia department of global practice in a sphere of ecology and natural resources Ksenya Lvovskaya was held on February 6 in Belhydromet. The main goal of the meeting was to discuss priorities and developing of ecological monitoring in the Republic of Belarus. Ksenya Lvovskay presented short characteristic of main activity of Global practice in a sphere of ecology and natural resources in Europe and Central Asia, including questions of ecological monitoring. Belhydromet representatives spoke in brief about information of existing system of data gathering, storage and processing, as a result of environment monitoring. Belhydromet specialists also told about national system of environment monitoring in the Republic of Belarus and about directions assigned directly to Belhydromet.  Meeting was held in a format of constructive dialog. Both sides outlined plans of further cooperation based on results of the meeting.
Belhydromet hosted media event dedicated to the 20th anniversary of Union state creation
Belhydromet hosted media event dedicated to the 20th anniversary of Union state creation. 12 representatives of press-media took part in the meeting: National press-center of the Republic of Belarus, Komsomolskaya Pravda v Belarusi, Soyuznoe Veche, SB.Belarus segodnya, BelaPAN, Minsk-news, magazine “Rodnaya pryroda”, information-analytic portal of Union state and others. Head of Belhydromet Roman Labaznov delivered welcoming remarks. Then deputy head Svetlana Kuzmich made a report about the realization of Union State Program for Union state hydrometeorological safety system developing of 2017-2021 years. She made a detailed report upon achieved results during Program implementation in 2018 and plans for 2019. Mass-media representatives communicated with Belhydromet specialists that are responsible for realization of action items of Program implementation. Guests of Belhydromet were also acquainted with objectives and the progress of 5 action items implementation of the Program.  After the Media event the sightseeing tour of Belhydromet was held for Mass-media representatives.   Experience of such media events shows undoubted interest of end users to National hydrometeorological service of the Republic of Belarus activity in frames of Union state. Developing of two-sided cooperation of National hydrometeorological services of Belarus and Russia, joint activity in frames of Committee of Union state for hydrometeorology and nature environment pollution monitoring is unique and can be the example for other countries hydrometeorological services.
World Bank started implementation of Technical Assistance Project «Enhancing Disaster Preparedness in Republic of Belarus»
Experts of World bank visited Belarus within the frameworks of implementation of Technical Assistance Project «Enhancing Disaster Preparedness in Republic of Belarus», which focuses on capacity building to ensure disaster preparedness in Belarus through improving services of extreme weather conditions, identification risks, data availability and dissemination and national strategy for disaster risk reduction. Achievement of the main project goal is planning through realization of three components: 1. Support of the wider political dialog on managing of disaster risks in Belarus. 2. Improving damage and loss evaluation system efficiency. 3. Improving the quality of hydrometeorological services and information on the radiation situation, including early warning systems. Realization of three components will be conducted through access to international expert knowledge and experience, best practice leadership and more suitable software with open source code and due to possibility of participating in global workshops and regional seminars. Project will be implemented jointly by Ministry of natural resources and environment protection of the Republic of Belarus and Ministry of emergency situations. Project proposal represents great interest both of Ministry of natural resources and Ministry of emergency situation and for Belarus in general.  Integrated approach will be conducted for risk evaluation and for basic and technogenic emergency situation, prevailing in the Republic of Belarus (floods, storms, wildfires, drought, and risks in radiation monitoring) as the result of the Project. Project will cover existing data bases of emergency situation and process of data exchange.    Within the frameworks of Project road map and investment plan will be developed with plan for modernization of services for providing meteorological, climate, hydrological information and also information in a sphere of radiation monitoring in Belarus. Opportunities for straightening and creating joint information platform with a purpose of modern and clear access to modern systems will be considered. The first meeting with World Bank experts took place on January 28, 2019. Belhydromet representatives briefly reported about the history of hydrometservice, the main activity in a sphere of meteorology, hydrology and radiation monitoring. The experts took place in an excursion through Belhydromet. Despite of the fact that the first meeting day was introductory, experts team and workers of Belhydromet have already determined necessary questions for the week to discuss. The meeting with the stakeholders as hydromet information end-users took place on January 29, 2019. Meanwhile experts were working with Ministry of emergency situation of the Republic of Belarus. 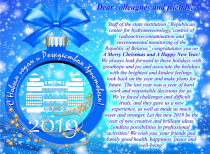 Belhydromet congratulates on a Merry Christmas and a Happy New Year!

Belhydromet’s representatives took part in a seminar-meeting with trade union activists and social partners
The seminar-meeting with the trade union activists and social partners was held at the Unitary Enterprise “Narochanka “Sanatorium” on November 16 - 18, 2018. The seminar-meeting was organized by the United Sectoral Trade Union Organization of environmental and geotechnology workers. More than 80 union members from 10 primary trade union organizations took part in the seminar-meeting. As a part of the program, the following events were held: a meeting of the presidium of the United Branch Trade Union Organization of environmental management and geotechnology workers, a study of trade union and social partners, as well as a competition in sports and intellectual games. The Names of Belhydromet’s representatives that took part in the events above are as follows: Natalia Olekhnovich, the primary trade union organization chairman, leading engineer of the International Cooperation and Public Relations Service of Belhydromet; Natalia Suslova, the primary trade union organization treasurer, of the 2nd category hydrologist of hydrology and agrometeorology service of Belgidromet; Tatyana Lazareva, Belhydromet’s trade union committee member, leader of the cultural-mass commission, leading chemical engineer of environmental information provision department of Belhydromet; Vladimir Kachanov, head of analysis and science service of Belhydromet; Yuri Gubankov, Head of the Planning and Economic Department of Belhydromet; Elena Ampilova, hydrologist of the hydrological forecasts department of Belhydromet; Sergey Trus, the head of the Volozhin meteorological station. Belhydromet team showed a high level of training, which allowed the team to win six medal places in various disciplines: table tennis, swimming, darts and intellectual games. Sergey Trus won the first place in the men's table tennis competitions was won by; Tatyana Lazareva won the 2nd place in the swimming competition among women; It’s necessary to mention separately Natalia Suslova and Elena Ampilova who won the third place in the intellectual games competition for among women. Congratulations to all the organizers and participants of the event, and separately the winners. The trade union committee of Belhydromet will continue to attract employees to a healthy lifestyle and to revitalize mass cultural and sports activities.