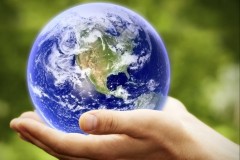 Almost everyone knows about the existence of Earth Day. Varieties of events are held in honor of the holiday - both on a local and global scale. Slogans, speeches and lectures are organized. But at the same time, the question almost every year is on which date is Earth Day. The year 2019 was no exception.
The fact is that the holiday itself is timed to the day of the vernal equinox, and, consequently, its date may occasionally changes.
In 2019 Earth Day is celebrated on March 20th.
The date of the holiday was chosen and approved by the UN in 1971not occasionally. On the day of the vernal equinox biological rhythm of the planet changes and it moves to a new stage of its development, at this moment nature is awaked and  renewed.
The holiday has peacekeeping and humanistic orientation.
The purpose of the World Earth Day is to draw attention of governments and ordinary people of different professions and ages to the fact that our planet, despite its seemingly enormous size and seemingly inexhaustible resources, is actually a small and fragile creation by standards of the Universe, because its ecosystems are very vulnerable. This heavenly body can be saved only by people unit from environmental catastrophe and destruction.
According to the established tradition every year within the framework of Earth Day in the vast majority of countries it is imperative to ring the Bell of Peace, which is a symbol of peaceful life, friendship and solidarity of all nations, and a call to action in the name of preserving culture and the best achievements of mankind. And the meaning of this ceremony is that during this minute, people should think about how to preserve our beautiful planet, how to improve life on it, to feel like inhabitants and part of the Earth.
The first Bell of the World was cast in 1954 in commemoration of  tragedy of Japanese cities that survived the nuclear bombing, and was installed at the UN headquarters in New York. It cast from coins collected by children of all continents, orders and medals and other honorary signs of people of many countries are also fused into it. The inscription on the Bell says: "Long live universal peace throughout the world."
Earth Day has its own flag with the image of one of the first photographs of our planet from space. This is a sign of awareness that only joint efforts can solve global environmental and social problems on Earth. Therefore, it is no coincidence that this holiday is actively supported by astronauts. After all, they were the first to tell the world how beautiful and defenseless our planet is, and how it needs the care of all of us.