Overview of hydrological situation of August 25, 2022

In the past period (August 20-24), the established hot and dry weather contributed to a further decrease in water levels in the rivers of the country, as a result of which, on the tributary of the Neman, the Ross river near the Studenets water entered the riverbed, and in Pripyat near the village of Chernichi, conditions for river transport deteriorated.
As of August 25, almost everywhere there is a decline in water levels with an intensity of mainly 1-6 cm per day. Small
(1-3 cm per day) an increase in water levels is observed on the Zapadnaya Dvina in the Polotsk – Verkhnedvinsk section, its tributary the Drysa river at the village of Dernovichi, on the tributaries of the Pripyat Goryn rivers at the village of Malye Vikorovichi and the Ubort at the village of Krasnoberezhye.
Unfavorable conditions for the operation of river transport are observed on the Zapadnaya Dvina near Vitebsk, the Neman near Grodno, the Dnieper near Mogilev, Zhlobin, Rechitsa and Loev, Berezina near Bobruisk and Svetlogorsk, Sozh near Krichev, Slavgorod and Gomel, Pripyat near Chernichi and Mozyr.
The water temperature is 14-24 °C in rivers, 22-23 °C in reservoirs.
In the next five days, the decline in water levels will continue on most rivers. 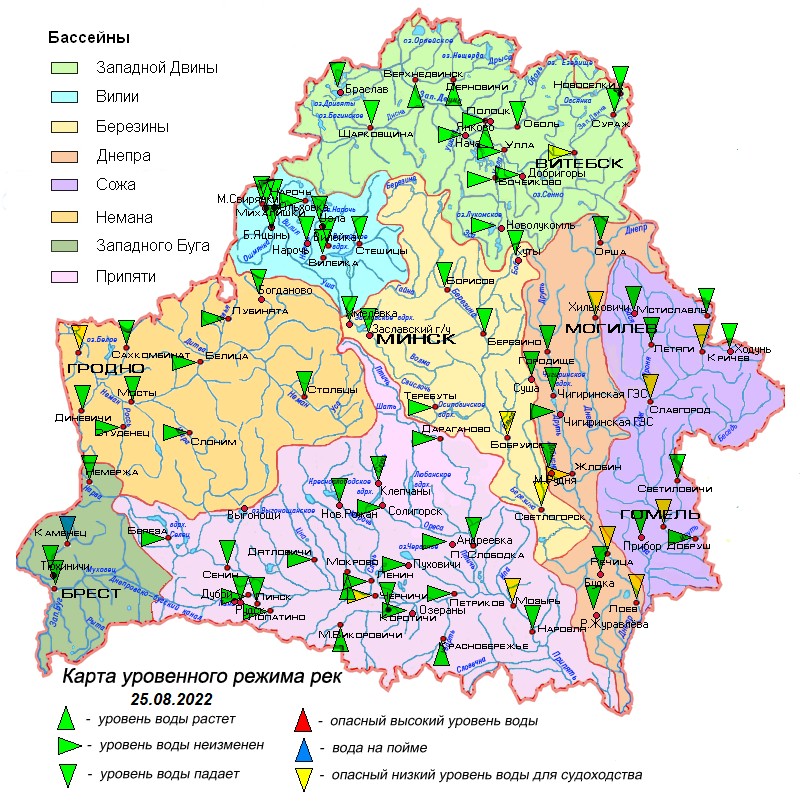 When using the information reference to Belhydromet is obligatory