The average air temperature in the winter season 2021/2022 was -1.8°С, which is 1.6°С above the climatic norm. The past winter season was ranked 11th in a ranked series of observations from the warmest to the coldest since 1881.

Deviation of the average monthly air temperature of the winter season
from the climatic norm (-3.4ºС) in the Republic of Belarus
In most of the country's territory, the positive anomaly of seasonal air temperature reached 1.5ºС and more. The smallest positive deviations are noted in the north (1.0ºС and less). 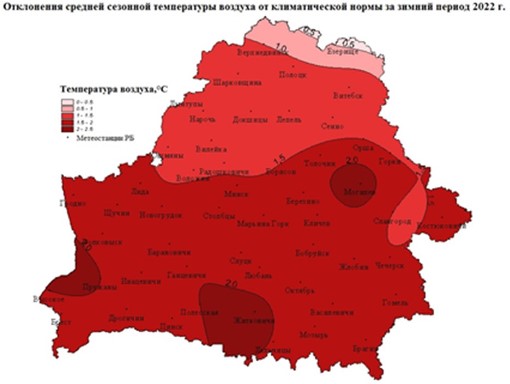 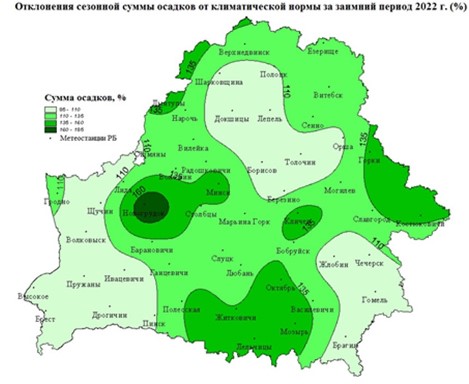 Deviation (%) of the monthly amount of precipitation for the winter season
from the climatic norm on the territory of Belarus
In the regional section, the largest amount of precipitation was recorded on the territory of the Grodno and Mogilev regions (160 and 158 mm, respectively, or 125 and 136% of the winter season norm). The smallest - in the Brest region - 125 mm or 111% of the norm.

Precipitation and climate norm by months of winter 2021/2022
In winter precipitation fell mainly in the form of snow, sleet and rain. In December, the snow cover was repeatedly established for a short time and destroyed. In January, in the first half of the month, the snow cover over most of the territory of Belarus was also repeatedly formed and destroyed, in the second half, for the most part of the country, the snow cover was stable. In the first and second decades of February, most of the country's territory, with the exception of the western and southern regions, remained covered with snow. In the third decade, snow cover remained in most of the Vitebsk, Minsk and Mogilev regions and at individual stations in the Grodno region, but was absent in the rest of the territory. The height of the snow cover on the last day of the season ranged from 0.1 cm (Dokshitsy, Oshmyany, Borisov, Mogilev) to 25 cm (Mstislavl). There was no snow cover in the west, southwest and south of the country. Fog, blizzards, icy spots and ice-covered ground, sticking of wet snow were observed on some days of winter, thunderstorms were noted in some places.
During the winter season, sometimes there was an increase in wind speed with gusts up to 15 m/s or more. On January 14-18 and in the second half of February, the maximum wind speed at some observation points reached the criterion of a dangerous phenomenon. The maximum wind speed for the season was recorded on January 14 at Polesskaya station and amounted to 32 m/s.