Climate characteristic of May, 2022

The average air temperature in Belarus for May 2022 was 11.6°C, which is 1.8°C below the climatic norm. The last spring month of this year took 17th place in the ranked series of observations from the coldest to the warmest, since 1945. And the last time May with an equal or lower air temperature was noted in 2020.

Deviation of the average air temperature in May for the period 1991-2022 from the climatic norm (13.4°C)
A negative anomaly of air temperature was observed throughout the entire territory of the country, which was mainly in the range from -1.0 to -2.5°C. The greatest negative deviation from the norm was observed in the north-east of the country at the Yezerishche station (-3.0°C). The lowest is in the southwest at Brest station (-0.7°C).
In the regional context, the lowest values of negative deviations of air temperature from the climatic norm were noted in the Brest region (-1.3°C), in the Minsk and Mogilev regions the deviations were the greatest (-2.1°C). 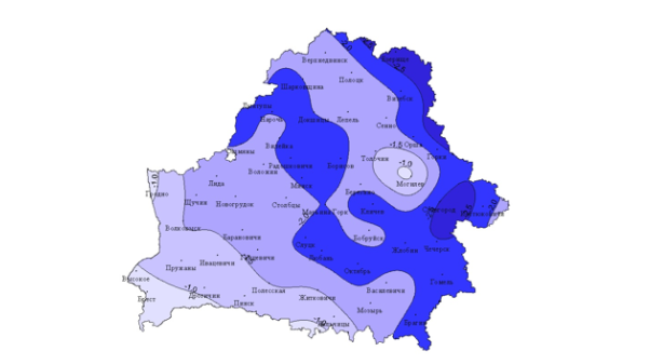 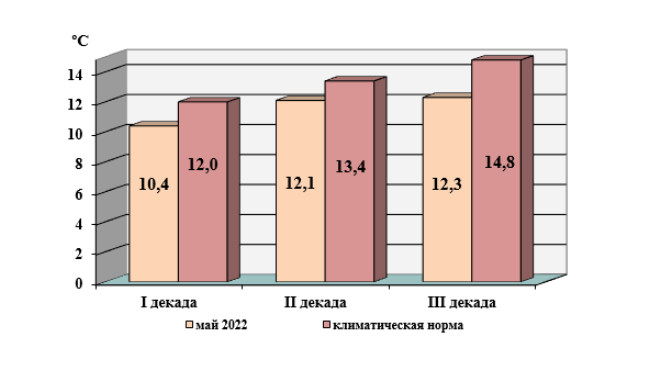 Average air temperature and climatic norm for the decades of May 2022 on the territory of Belarus
The air temperature during the day during the month in snovny was +10 +20°C, and on the warmest day it rose to +21 +28°C. The maximum value (+29.7°C) air temperature reached on May 12 at the Lelchitsy station.
The air temperature at night during the month was mainly in the range of 0 +13°C, and on the coldest nights, mainly in the first decade of the month, in some areas it dropped to negative values. The minimum air temperature was recorded at the stations of Yezerishche and Berezinsky Reserve on May 5 and amounted to -4.3°C.
During the month, an average of 62 mm of precipitation fell in the republic, which amounted to 98% of the climatic norm. On the territory of the country, the humidification conditions were heterogeneous: 75-135% of the norm fell for the most part. In the southwest, the amount of precipitation was the lowest and was within 47-70% of the norm. 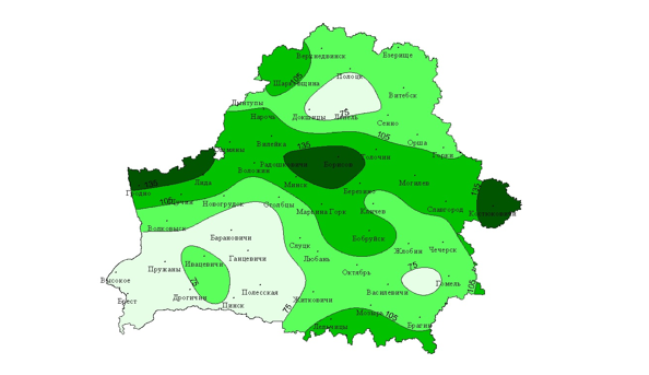 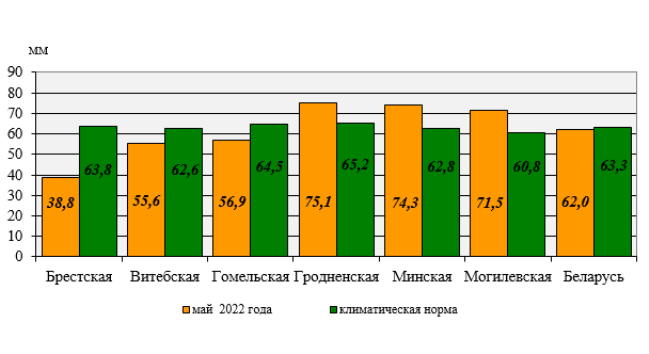 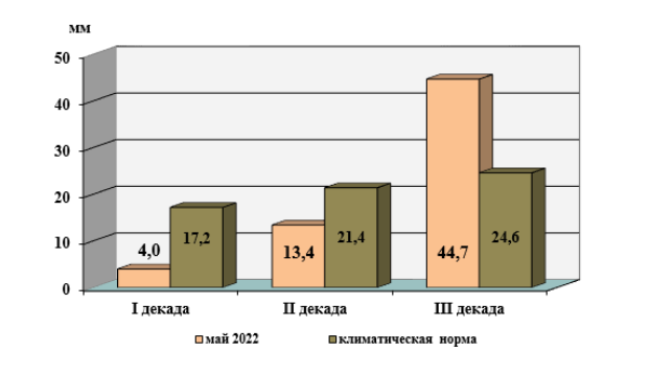 The amount of precipitation and the climatic norm for the decades of May 2022 on the territory of Belarus
Precipitation fell in the form of rains. Thunderstorms were observed everywhere, hail in some areas, fogs at night and in the morning.
Throughout the country, there was an increase in wind speed with gusts up to 15 m/s and more, in some places reaching the criterion of a dangerous hydrometeorological phenomenon (25 m/s and more). The maximum wind speed for the month was registered at the Klichev station on May 12 (31 m/s).
When using the information reference to Belhydromet is obligatory