The average air temperature in Belarus in March 2022 was 1,1°C, which is 0.3°C higher than the climatic norm.

Deviation of the average air temperature in March for the period 1991-2022 years from the climatic norm (0.8 ° С)
A positive anomaly of air temperature was noted over the most of the country's territory, which was mainly in the range from +0,1 to +1,0°C. The largest positive deviations from the norm were noted at the stations Volozhin (+1,1°С), Novogrudok (+1,1°С), and Mogilev (+1,2°С). In a small area in the central, southeastern and northeastern regions, an insignificant negative anomaly was noted, which reached its highest value at Ezerishche station (-1.2°C). 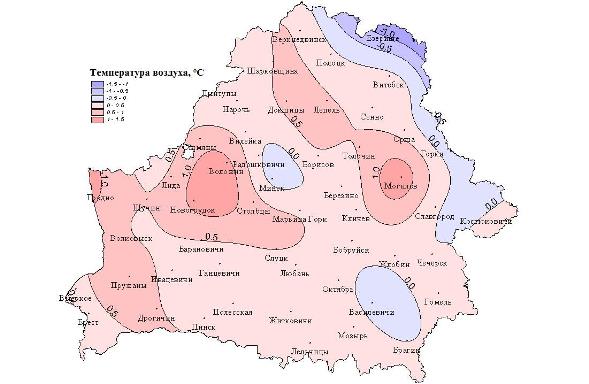 Deviation (°C) of the average air temperature in March from the climatic norm on the territory of Belarus
In the regional context, the largest values of positive deviations of air temperature from the climatic norm were noted in the Grodno region (+0,8ºС), in the Vitebsk, Mogilev and Gomel regions the deviations were the smallest (+0,1ºС).
The average air temperature in the first and second decades was below the norm by 0,8 and 0,6°C respectively. The third decade was warm with a positive anomaly equal to +2,2°С. 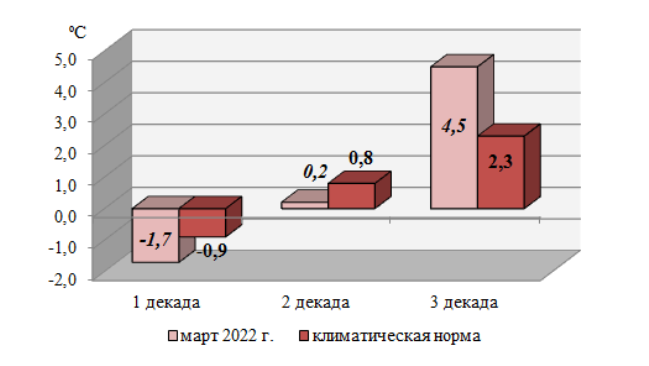 Average air temperature and climate norm by ten days of March 2022 on the territory of Belarus
The daily air temperature during the month was mainly -1 +10°C, and on the warmest day, mainly in the third decade, it rose to +11 +16°C and above. The air temperature have reached its maximum value (+19,2°C) on March 23 at Vysokoye station.
The air temperature at night during the month was mainly within -10 -2°С, and on the coldest nights in the first half of the month in some areas it dropped to -11 -15°С and lower. The minimum air temperature was recorded at Ezerishche station on March 10 and amounted to -19.9°C.
During the month, an average of 6,4 mm of precipitation fell in the republic, which amounted to 17% of the climatic norm. March 2022 was the driest on record since 1945. At 19 stations in the territory of Vitebsk, Grodno, Minsk and Brest regions, the historical minimums of the amount of precipitation for the month were updated. For most of the country, 1-30% of the norm fell out. The largest amount of precipitation fell in the southeast - more than 45% of the norm. 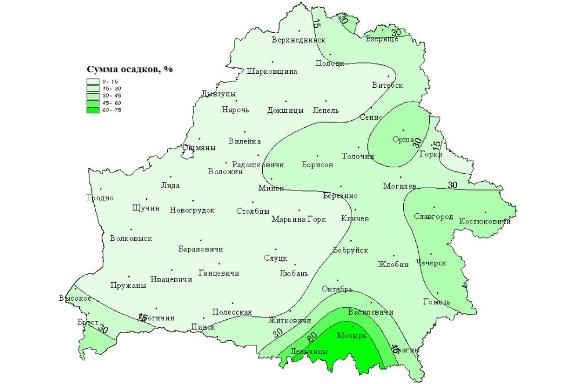 Precipitation for March 2022 and climate norm by regions and territory of Belarus
Precipitation practically did not fall in the first and second decades, and only in the third decade was 4,9 mm or 42% of the ten-day norm recorded. 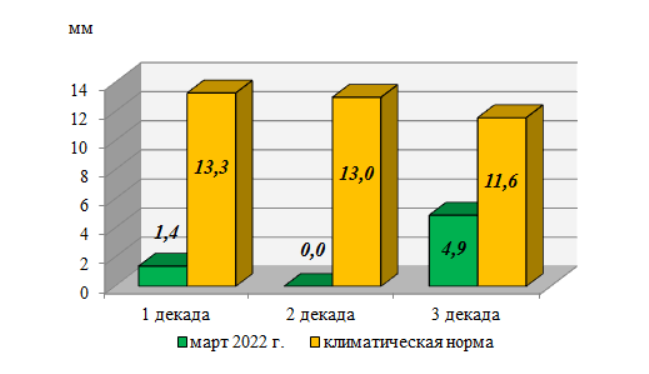 Precipitation and climate normal for ten days of March 2022 in Belarus
Precipitation fell in the form of rain, snow and sleet. In the first decade, the snow cover remained mostly over most of the territory of the Vitebsk and Mogilev regions, as well as at individual observation points in the Minsk and Grodno regions. In the rest of the territory, the presence of snow cover was episodic. In the first and second half of the third decade of March, the destruction of the snow cover continued, but due to cases of snowfall at the end of the month, a snow cover from 0,1 cm (Vileika, Ezerishche) to 5 cm (Orsha) was observed.
Throughout the country, there was an increase in wind speed with gusts of up to 15 m/s or more. The maximum wind speed for the month was recorded on March 28 at Dokshitsy station and amounted to 24 m/s. Fog, sleet and sleet were observed in some places on single days. On March 28, hail 3 mm in diameter was noted at Polotsk station.