The average air temperature in Belarus in February 2022 was 0.3°C, which is 3.8°C above the climatic norm. The second month of 2022 was ranked 8th in a ranked observation series from the warmest to the coldest since 1945.

Deviation of the average air temperature in February
for the period 1991-2022 from the climatic norm (-3.5 ° С)
The positive air temperature anomaly spread throughout the country and was mainly in the range of 3.2-4.2°C. The largest positive deviations from the norm were noted at the stations Vasilevichi and Mogilev (4.4 and 4.5°C, respectively). 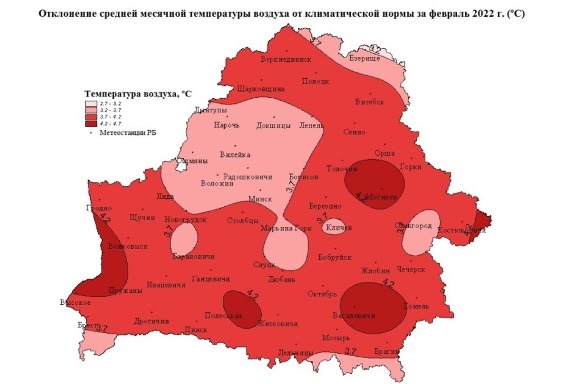 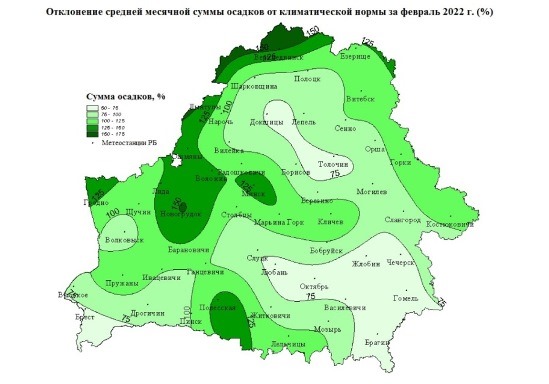 Precipitation in February 2022 and climate norm
by regions and across the territory of Belarus
During the month, precipitation fell unevenly. In the first and second decades, excessive moisture was noted (109 and 134% of the norm fell, respectively), in the third decade there was a shortage of precipitation (65% of the norm).

Precipitation and climate norm
by decades of February 2022 on the territory of Belarus
Precipitation fell in the form of rain, snow and sleet. In the first and second decades, most of the country's territory, with the exception of the western and southern regions, remained covered with snow. In the third decade, snow cover remained in most of the Vitebsk, Minsk and Mogilev regions and at individual stations in the Grodno region, but was absent in the rest of the territory. The height of the snow cover on the last day of the month ranged from 0.1 cm (Dokshitsy, Oshmyany, Borisov, Mogilev) up to 25 cm (Mstislavl). There was no snow cover in the west, southwest and south of the country.
In places, an increase in wind speed was noted with gusts of up to 15 m/s or more. The maximum wind speed for the month was recorded on February 19 at Soligorsk station and amounted to 27 m/s. In some areas, fogs, ice and sleet, sticking of wet snow were observed.