The average temperature in February 2021 was -6.5°C, which is 2.2°C below the climatic norm. For the period 1945-2021, February with such and lower air temperatures occurs on average once every three years, and was last observed in 2012.

Precipitation in February 2021 and climate norm
by regions and across the territory of the Republic of Belarus
During the month, precipitation fell unevenly. In the first decade, excessive moisture was noted (21.9 mm or 178% of the norm per decade fell), in the second decade, the moisture regime was close to the usual (12.4 mm or 105% of the norm), in the third, there was a shortage of precipitation (4.5 mm or 41%).

Precipitation and climatic norm for decades of February 2021
on the territory of the Republic of Belarus
Precipitation fell in the form of rain, sleet and snow. Throughout the month, snow cover was everywhere, reaching a height of 30-58 cm in places. Despite intense snowfalls, the historical maximum snow cover height was exceeded only at Gorki station (here the maximum snow cover height in February 2021 was 58 cm), before that the absolute maximum In the last days of the month, at some stations in the Vitebsk and Brest regions, the snow cover completely disappeared. On some days of the month, fogs, blizzards, ice, ice on the roads were noted in places. 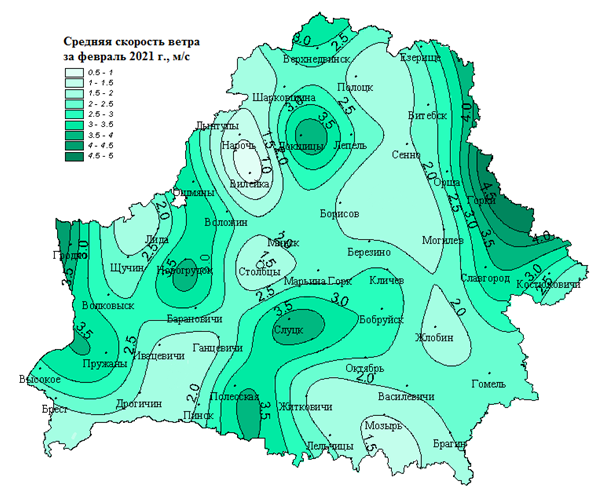 Average wind speed for February 2021
During the month, the average wind speed was generally in the range from 1.5 to 3.0 m/s. In some areas, it reached a value of 3.5-4.0 m/s and higher. The lowest wind speeds on average for the month were recorded in the area of Naroch and Vileika stations (1.1 and 0.8 m/s, respectively), and the highest values - in the area of Gorki station
(4.5 m/s). On some days in February, the wind increased in gusts to 15 m/s and more, and the maximum wind speed (19 m/s) was recorded at Gorki station on February 13.