The air temperature for December 2020 on average in the republic was -0.8°C, which is 2.5°C higher than the climatic norm. December with the same and higher average monthly air temperature, since 1945, there has been an average of one once every 5 years, and in 20 years - once every 2-3 years. 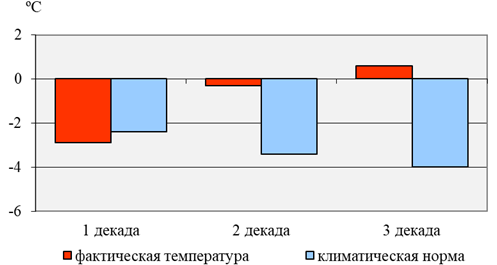 Rainfall for December 2020 and climate norm by regions and across the territory of Belarus
Precipitation fell in the form of rain, snow and sleet. On the last day of the month, there was no snow cover on the territory of Grodno, Brest, Gomel and most of the Minsk regions, and on the rest of the country the snow cover height ranged from 0.1cm to 9cm. Fogs and ice phenomena were observed on some days of the month, which reached the criterion of a hazardous phenomenon at Orsha station on December 29 was heavy ice with a 20 mm diameter of the ice layer. During the month, on some days the wind increased in gusts up to 15 m/s and higher, and the maximum value of the wind speed (20 m/s) was recorded at Novogrudok station on December 29.