September 16 - International Day for the Protection of the Ozone Layer

The theme of September 16, 2022 is "The Montreal Protocol: Global cooperation to protect life on Earth." This motto is dedicated to the 35th anniversary of the adoption of the Montreal Protocol, the most successful agreement on environmental protection.
On September 16, 1987, the Montreal Protocol on Substances that Deplete the Ozone Layer was signed. In honor of this event, the International Day for the Protection of the Ozone Layer was established.
In the mid-70s, scientists discovered that a number of chemicals used by humans cause the destruction of atmospheric ozone. Further study of the atmosphere made it possible to detect a giant ozone hole over Antarctica, and in general to better understand the processes taking place in the air. The discovery turned out to be so important that scientists who claimed the destruction of the ozone layer received the Nobel Prize in chemistry.
The protocol adopted as a result of these studies is one of the most successful examples of international cooperation in the field of environmental protection. Thanks to its observance, humanity has not only managed to prevent a global catastrophe, but also to achieve a sustainable recovery of the ozone layer on the planet.
Ozone is one of the natural forms of oxygen existence. The gas consists of three oxygen atoms and is designated as O3. About 10% of all atmospheric ozone is in the troposphere, which extends 10-15 kilometers above the Earth's surface. The remaining 90% of ozone is located in the stratosphere at an altitude of about 30 kilometers. This zone with the highest concentration of ozone is known as the ozone layer. The higher the concentration of ozone, the better it protects organisms from solar radiation.
Ozone is an extremely unstable gas. At room temperature and normal atmospheric pressure, it turns into ordinary oxygen O2 in a few minutes. In the upper layers of the atmosphere, it can exist relatively steadily, but even there there is a constant process of its decay and formation. All these chemical reactions occur under the influence of sunlight.
The thinning of the ozone layer reduces its absorption capacity, which makes ordinary sunlight dangerous for life on Earth. The widespread use in industry and everyday life of gases containing halogens (especially chlorine and bromine) has led to a serious increase in their concentration in the atmosphere. These compounds are relatively inert and can exist in the air for a long time, they are not extracted from the atmosphere with precipitation, and over time, with the natural movement of air flows, they enter the stratosphere. There they actively react with ozone, oxidize, and subsequently return to the ground. 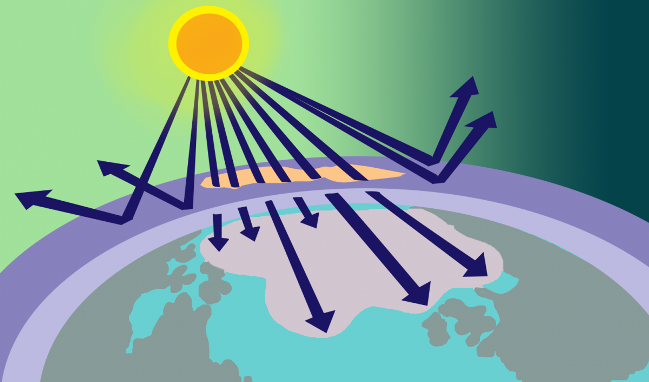 Chemical reactions occurring in the atmosphere are complex and multi-stage. Computer simulations show that one atom of bromine or chlorine can, after going through the entire chain of transformations, destroy thousands of ozone molecules. And since the process of its formation has remained unchanged, such an increased rate of decay threatens to disrupt the existing balance.
Due to the peculiarities of the movement of air flows and the properties of the gases themselves, their lowest concentration is in the tropics, and the highest is at the poles. This is one of the reasons that the largest ozone hole is located over Antarctica, although emissions of ozone-depleting substances occur all over the world.
Despite all the difficulties in assessing the state of the atmosphere, it can be argued that the adoption of the Montreal Protocol and compliance with its conditions have already yielded results. The ozone content is growing by an average of 2% per decade. Today, the ozone layer is being restored. Forecasts for each of the ozone-depleting substances vary, but in general, ozone levels will return to 1980 levels by the middle of the century. In compliance with the Montreal Protocol and its amendments, all countries of the world can expect a complete purification of the atmosphere from ozone-depleting substances by 2100.
The ozone layer is also of great importance for maintaining the temperature balance on our planet. The fight against global warming, which is happening today as a result of anthropogenic activity, is an urgent problem of all states, in particular, industrialized countries, including the Republic of Belarus. The ozone layer is considered one of the most important natural objects that are subject to legal protection.
The Protocol has been in force for the Republic of Belarus since 1989. Since then, the country has fulfilled all its obligations, the consumption of ozone-depleting substances has decreased by more than 60 times. In order to conduct research in the field of the ozone layer, on June 14, 1997, the Establishment of the Belarusian State University "National Research Center for Monitoring the Ozone Layer" was established, whose specialists monitor changes in the thickness of the ozone layer over Belarus, and also work on the issue of disposal of hazardous gases and replacing them with safe analogues, constantly monitor the state of the atmosphere and the ozone layer.
While we protect the ozone layer, it continues to protect all the diversity of life on the planet.
When using the information reference to Belhydromet is obligatory